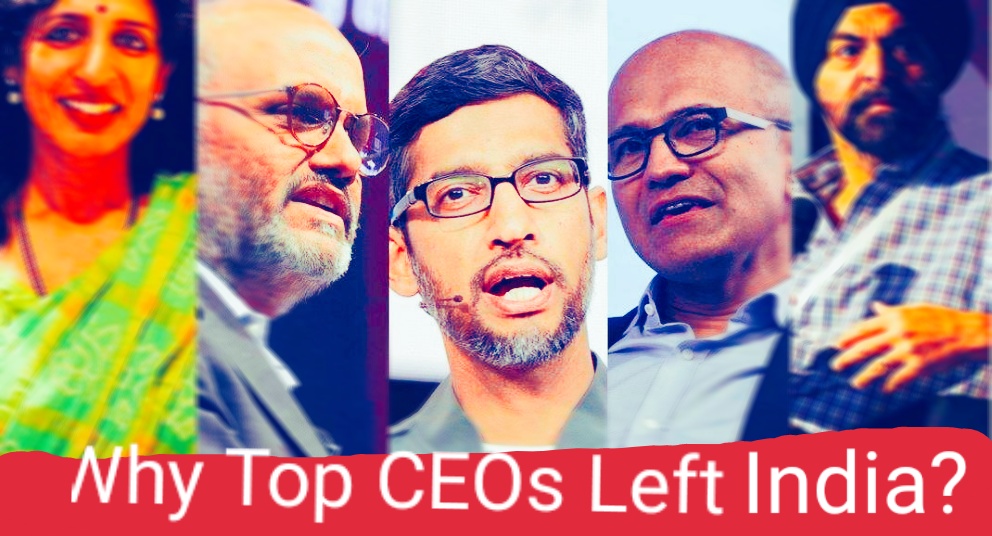 In the world, Top tech companies like Microsoft, Alphabet, Adobe, Twitter and Google their CEO’s are from Indian origin. recently, Twitter CEO Jack Dorsey stepping down to the CEO of Twitter and the new CEO of Twitter are from Indian-American. Amazon will be next company where that will choose Indian-America CEO of their Company, but Chose Andy Jassy CEO of Amazon.com in Jul 2021. The most of Peoples or Engineering has a big confusion regarding Best degree and selection in America’s most top tech company’s CEO whom are from Indian origin. Everyone wants to become a CEO or high level step for their hards and patience, but they things why they can’t be a CEO of any Indian or other Asian companies.

Is America or Europe a Land of Opportunity than Asian or other African countries.

The Mostly Success or other normal Peoples are thinks America or Europe really a land of Opportunity. First of all, Elon Musk was one of first South Africa Success person who got first success life in US than other countries. Mostly new or younger are choose America or Europe for Education to become Success in the world of Technology. These countries like Japan, India, China, Indonesia, Bangladesh, Myanmar, are mostly reaching America or Europe to learn the new technology. Mostly are looking for Jobs in US, UK, Germany and France to become success with learn & Earn, America has one of top choice for Indian who are had more hard to reach more steps like CEO, Advisor, Analyst, future technology and business.

Top 50 companies CEOs are Indian origin and recently joined more United State’s Technology companies. The most of Indian, American and other country’s new peoples are ask about top CEOs are Indian-American.

Why US top company’s CEO Indian-American, Why they Top ‘Engineers’ or ‘CEO’ left India?

In the India or Asia and Africa. mostly big investors, financials, IT field and Big tech companies are based on Surename like ADANI or TATA. The Indian companies mostly handled by India CEO, Advisor or Investor than other Asian or Americans. Indian Skills and Development are more cost able or expensive with the normal Degree, But Degree of the Skill we easily get in India but the Degree may not skillful than Paper signed. The Most number of students are visits California, Germany, UK, Australia and Netherlands to Joins Skill & Development, Pharmaceutical, commerce.

In the Asia or India, A business can efforts for the become owner of company or Advisors and CEO of company, but its more difficult for the normal person to do this for getting success achievement in big level. The US and Europe are world’s top Skill sectors where the mostly Indians are been successful.

The Law & Order, Rules and Rights of lives, really matter in these countries where we start our dream with Skills not on the Family Business, Religions and Casteism. Many Asians are handles top positions in US, UK and Germany in the field of Finance, politics, Business Skills & Developers, Security and also in Defense of US. American are angers many times on the Refugee and other new Asian, African or European CEO about the country or racism, but still the Law & Order of US and Europe more stronger to safe all the Rights of everyone than Indian or Asian laws.

Elon Musk (African), Sunder Pichai (Indian), Oscar Tang (China) and many businessmen are live in United State without any fear of Criticize, Although now they all are American Civilians but this kind of racism, fascism, religious and many ideology used by Many countries in Asia. The Law and Order of United State or European countries are more Stronger than Politics and religion to keep the calm in country with together All the united World.

The IT or Skill development field of India is more strength to make the world better to easily get jobs and ownership in US or other European country but Indian or Asian Technology Education field is more Expensive where the most normal peoples are can’t do to make the successful life.

In Asian countries, Nepotism, Racism, Xenophobia, Religionalism, Communinalism and Casteism one of top problems in Asians countries. But the strong Law & Order, Secularism and Democracy are mostly empowering by American and European to keep the country and their lovers safe the rules and orders.

The top Engeeriners are choose these countries to make their dreams so beautiful with best Salary, Advisor, business and Law And Orders great to become a great person whether you are from India, Pakistan, China and Bangladesh.