US will impose any Military sanctions on Russia in a tension between of Ukraine-Russia? – RKM 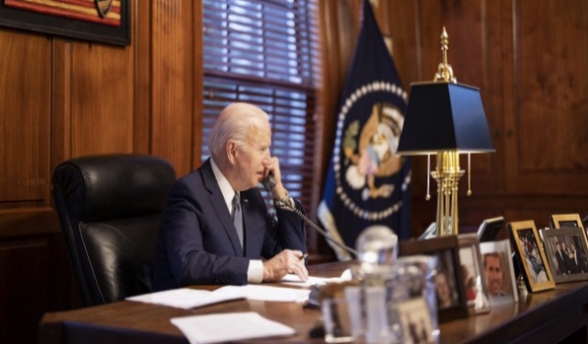 In A recent military preparation between NATO-Russia in Ukraine might expects a new world war In Europe. In case of Ukraine Vs Russia, American president Joe Biden warns Russia for any new sanction on Moscow. according to Kremlin, Russia warned US president ‘Joe Biden’ that new sanctions against Russia would be a big mistake by US President Biden in Europe. In a phone call between US president and Russian leader happened 50 minutes of speaks about Ukraine-Russia war and preparation of New world War. An Build-up of an estimated 100,000+ Russian troops and military equipment on the Russia-Ukraine border has sparked fears Moscow is preparing to invade on the Ukraine.

See below, A Map of NATO & Russian Army deployments.

As per the reading of this map of Russia and other neighbor tensions & in Action plans strategy will be same NATO countries. Russia wants NATO should have to leave border of Russia and other neighborhood countries. But Ukraine fears of Russian invade at Ukraine. The Russian enemy Ukraine joined NATO’s membership in 12th June 2020 and NATO statement the new status “does not prejudge any decisions on NATO membership. The crisis comes seven years after Russian forces marched into Crimea and seized the territory from Ukraine. The all sanctions on Russia will be applies by Western Sanctions which created by NATO countries not from Official US. Russian foreign affairs adviser Yuri Ushakov said, US president Joe Biden repeated the US threat of Western Sanctions if Russia Invade the Ukraine or attack on Ukrainians soldiers.

Russian president Vladimir Putin said in response that such a move could cause a complete breakdown in ties between NATO and Russia also Mr. Ushakov said ‘it would be a ‘colossal mistake‘ that would entail grave consequences, in Europe at long runs of war and preparation of wars between Ukraine and Russia.

This war will not be fights in between Russia & Ukraine because it will be two kind of Front war Between Russia-NATO and America. in a talk, Russian President told Mr Biden that Russia would act in the same manner Washington DC would if weapons were deployed near American Border.

White House spokesperson ‘Jen Psaki‘ urged Russia to de-escalate tensions with Ukraine during the phone call, which was requested by Russian officials. She Added, He made clear that the United States and its allies and partners will respond decisively if Russia further invades Ukraine. in a phone call between Russia and American, Biden Would make clear to the Russian president that a diplomatic path remains open to reduce tension in Europe.

The call comes ahead of talks between senior US and Russian officials in the Swiss city of Geneva on 10 January 2022. Its the final Decision on the Russia-NATO tension in Europe.

As per a view of Russia-NATO tensions regarding to Ukraine and Belarus might a new Economical and Defense impact on the Russia where the Western Sanction will be applied or imposed on the Russia during the preparation of invade Ukraine. Moscow’s security demands, submitted earlier this month, included denying NATO membership to Ukraine and other former Soviet countries and the rolling back of Western military deployments in Central and Eastern Europe.

So we will publish BREAKING news on the 10 Jan 2022, where the US, NATO countries and Russia will be included in new Peace Talk in Geneva, Switzerland.

Apple will be accepts Metaverse for the future of Apple Invements : Apple on Metaverse & NFTs