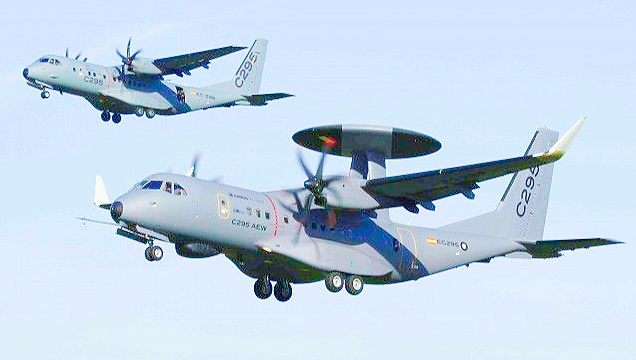 In a first major decision, IAF (Indian Air Force) shall include a new ‘Made In India’ AirBus C-295 medium transport aircraft replacing to Avro planes after the confirmed test In Barmer, Rajasthan : Defense News India

NEW DELHI, INDIA | a new AirBus C-295 medium transport aircraft at the Indian Air Force will replace its ageing Avro planes, which were first inducted around 60 years ago. On the Wednesday a Cabinet Committee security approved a procurement of 56 C-295 medium transport aircraft for the Indian Air Force to its Avro plane which were first inducted around 60 to 62 years ago. Its first time, Security committee taken a big decision on the replacing of new ‘Made In India’ Airbus aircraft to be a faster and more featured.

16 aircraft will be delivered in a flyaway condition by the Airbus Defence and Space of Spain within 48 months of signing the contract while the remaining 40 planes will be manufactured in India, according to the defense ministry. The cost of the procurement is expected to be in the range of INR 18,000 to INR 20,000 crore Approximately $4 Billion USD , people familiar with the project said.

The 40+ Planes will be manufactured in India by consortium of Airbus Defence, Space and Tata Advanced Systems Limited (TASL) within 10-8 years of signing the contract. Mostly Indian companies and technology were be used to add new features, manufacturing, design, new tech and budgets. In these new AirBus C-295 Median Transport Aircraft will be added some features every year from Indian company TATA (TASL) other space technology providers.

The C-295MW aircraft is a transport plane of 5-10 tonne capacity.

In the next 48 months, 16 aircraft will be delivered in Flyaway from Spain where contract signed and 40 aircraft will be manufactured in India by TATA consortium within 10 years of the signing of the contract,” the ministry said.

“The project will augment domestic aviation manufacturing resulting in reduced import dependence and expected increase in exports,” it said.

The ministry said before completion of the deliveries, a servicing facility for C-295MW aircraft is scheduled to be set up in India.

“It is expected that this facility will act as a regional MRO (maintenance, repair, and overhaul) hub for various variants of C-295 aircraft,” it said.

In the next further 5 year, almost 50% of C-295 Medium Transport Aircraft will be in Indian Air Force for emergency use of any situation to defeat any can deal with any danger in future. By the way, the deal between contractor and buyers of 16 AirBus Aircraft will be take a first tackle from Spain, Europe, next other 40 Aircraft will be made in India through TASL ( Tata Advanced Systems Limited) to make its first Made In India Air Bus aircraft deal.

“In addition, the OEM (original equipment maker) will also discharge its offset obligations through direct purchase of eligible products and services from Indian offset partners giving a further boost to the economy,” it added.

“The programme will act as a catalyst in employment generation in the aerospace ecosystem of the country and is expected to generate 600 highly skilled jobs directly, over 3000 indirect jobs and an additional 3000 medium skill employment opportunities with more than 42.5 lakh man-hours of work within the aerospace and defence sector of India,” the ministry said.