In the world, AdSense have almost 2Million+ users of their platform. now AdSense team forwarding now for paying U.S Tax Information and imposing taxes on the users of AdSense.

Actually, This policy is running from United States national Tax Department which are now imposing 15& to 30% U.S Tax for users of United State.

Then now, if you are an American Publisher or getting traffic from United State at 100% whether you are from Asia or Europe, then should have to fill U.S. Tax Form which Google Or YouTube have already notified you from E-mail or Dashboard Tax’s popups.

For example, Are you from India, and you are a blogger whom you writing about America’s news, Blogging, Entertainment and getting exact traffic from United States then you have to pay Tax to U.S Income tax department. but if you are getting Traffic from Europe, Asia and Africa then don’t worry about Tax because the form of AdSense provided you should have to fill for United States Tax Information. 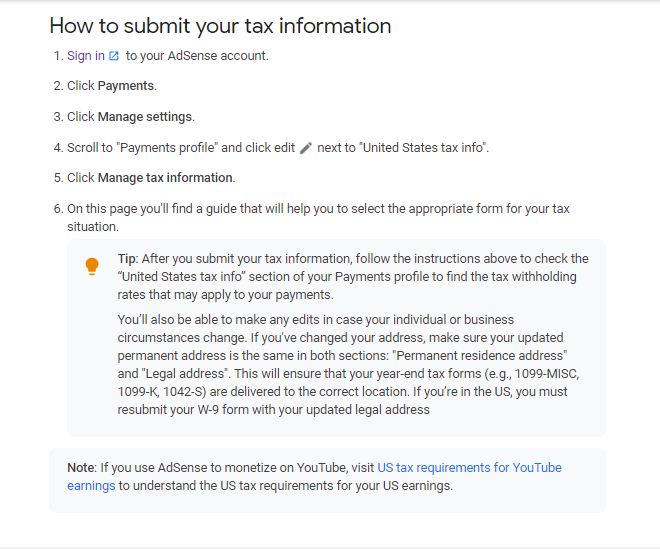 By the way, It depends on the country where Income Tax allowed same like United States. apart from United States, many countries have internal Tax for bank account’s transactions.

Now, In this policy of AdSense, Almost it (AdSense) impose Tax on your earning when you are getting traffic or viewers only from United States.

Don’t forget to fill from of U.S Tax information, otherwise AdSense will be impact on your AdSense Accounts.